Who is that cute pony with the full mane and friendly disposition? Why, it’s a Shetland Pony, of course! This beloved pony breeds has been a favorite of young riders—as well as adults—for many years. Let’s take a look at some of the attributes of this beloved breed.

Breed at a Glance

◆ Shetland Ponies are found in all colors (except for spotted).
◆ They possess a durable double coat that helps protect them from inclement weather.
◆ They are known for their stamina and their kind dispositions.

Thanks to their petite size and athleticism, this breed has long been popular as a child’s mount. Shetlands fill this role quite well, performing in hunter/jumper classes, English and western flat classes, and more. Adults also enjoy them as driving ponies, participating in events such as carriage driving, pleasure driving, roadster and fine harness.

And don’t forget, some horses and ponies are just kept for fun and companionship! Shetland ponies are excellent candidates for “pasture pet” purposes, because they are friendly and cost a little less to care for than larger equines.

Not everyone has the same purpose or look in mind when choosing a horse or pony. Some people love the traditional look of the Shetland, while others prefer a more refined or elegant appearance.

For these reasons, Shetland Pony breeders have worked over the years to produce different variations and types within the breed. You’ll want to note that, despite their differences in appearance, 46 inches at the withers (11.2 hands) is the maximum height for Shetland Ponies in the U.S., and ponies in the United Kingdom must not exceed 42 inches (10.2 hands).

Shetland Ponies in the United Kingdom

Some of the original Shetland Ponies were highly prized in the 1800s for their work helping coal miners. Later, when ponies were no longer needed for this job, they began to be recognized as the excellent children’s ponies that they remain today.

In the U.S., the Shetland Pony breed can be divided into four distinct types:

Reminiscent of early member of the breed who lived in America during the 1950s, the Foundation type is a solidly built individual with more substance than the other types.

Similar in type to the Modern Shetland, but less “extreme,” according to the breed standard.

The Hardy and Robust Shetland Pony

One of the breed’s most well-known traits is its hardiness. The Shetland Pony hails from the rugged, hilly Shetland Islands of Scotland, where some of these ponies still live. For thousands of years, the ponies have traversed this terrain, and the result is a breed that is resourceful, hardy, cold-weather tolerant, and an efficient converter of forage into calories.

This means that in addition to their hardiness, Shetlands—like many other pony breeds—are naturally “easy keepers.” This definitely saves on the feed bill, but owners must also be careful not to overfeed, as the ponies may have a tendency to become overweight. Overweight ponies may be at risk for laminitis or other health issues.

Like other pony breeds, these small horses know how to put on a winter coat! Some individuals look quite fuzzy in the winter, but that’s all part of their naturally hardy nature.

The American Shetland Pony Club offers a youth program that focuses on teaching many aspects of pony care, as well as competition opportunities for Shetland Ponies. Find out more at shetlandminiature.com/youth.

This article about the Shetland pony appeared in the Spring 2021 issue of Young Rider magazine. Click here to subscribe! 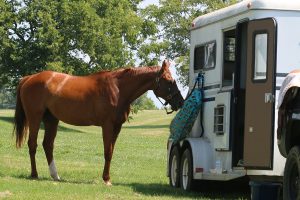 Show season is here, and warmer weather means it’s time for trail riding. No matter your destination, packing your trailer properly should be a priority....
United States Pony Club