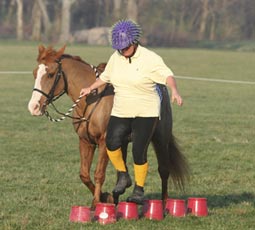 In mounted games competitions, teams of five riders–four riding in each game–race against one another in exciting relays that combine skill and speed. Top riders go full speed–usually a gallop–through each race! However, mounted games offer divisions for riders of all levels.

The Mounted Games Across America (MGAA) playing field for the races is 180 feet from A line (start/finish) to C line (changeover), with an additional 45 to 100 feet at each end to provide room for handoffs and stopping. The B line is a centerline between A and C. There are dozens of games to choose from, but here are 10 of the most popular games according to a recent poll by MGAA.

Litter: In the litter race, each rider on the team must ride from the A line carrying a 4-foot long dowel. While mounted, the rider scoops up a piece of “litter” (a sport water bottle with the top cut off) beyond the C line, and then heads back to the A line, dropping the litter in a trash can set on the B line (still using the stick). As that rider crosses the A line, he or she then hands off the stick to the next rider to go.

Sock: In this game, the first rider starts from the A line carrying a sock, which he or she drops in a bucket set on the B line. Just beyond the C line are four socks on the ground. The rider must vault off the pony (think of an emergency dismount), grab a sock from the ground, turn the pony around and vault back on. At the A line, the rider hands off the sock to the next rider. The last rider to go drops a sock in the bucket on the way up, and on the way back.

Flag Fliers: For this game, the first rider starts from the A line with a 4-foot flag. That rider then carries the flag and puts it into a cut down cone behind the C line as he or she turns the pony. The rider then pulls a flag from a cone on the B line on the way back. At line A, the rider hands that flag to the next rider. The last rider finishes with flag in hand. If the cone is upset, it must be reset.

Joust: In the joust race, a board with four metal targets is set on the B line. The first rider starts from A, carrying a lance with a rubber tip. Each rider must knock down one of the targets as he or she passes the board. Then the rider hands the lance off to the next rider to go, who also knocks down one target. The second rider starts from the C line, the third rider from A and the fourth (the finisher) from C. At the end of the race, all the targets will be knocked down.

Carton: In the carton race, four plastic sport bottles with the tops cut off are placed upside down on four poles set in a straight line for each lane (one lane per team), about 30 feet apart. The first rider starts from A and pulls a carton off one of the poles, then drops the carton in a bucket placed behind the C line. The rider then heads for the A line, where the next rider to go can take off as soon as the incoming rider passes A.

Run and Ride: In Run and Ride, five poles are placed upright in a straight line, about 30 feet apart. The first rider starts dismounted from line A and must run, leading the pony, to just beyond the last pole, where the rider must vault onto the pony and ride back to the A line. The second rider to go is mounted. That rider must ride down to the fifth pole and vault off the pony before the poll is reached. That rider then turns around the pole and rushes back to the start line, leading the pony. The third and fourth riders then complete the race in the same way.

Pony Pairs: In Pony Pairs, a pair of riders, each rider holding an end of a 3-foot rope, ride in tandem weaving through a set of four poles, from the A line to the C line. At that point, one rider drops out and the other rider picks up a new teammate. The second pair rides back through the poles to the A line, where one rider again drops out and a new rider is picked up. The race finishes when the last pair passes the finish line.

Hula Hoop: Hula Hoop is another pairs race in which two riders start from line A. As they approach the B line, one rider vaults off his or her pony and runs to a hula hoop placed on the ground. The rider must go through the hula hoop, and then vault back on the pony, which the mounted rider has been leading alongside. The pair then crosses the C line, one rider drops out, and the next rider returns to the B line, performing the same maneuver. Each rider goes through the hula hoop once. The ponies must be well trained for this race in order to lead steadily and pick up speed as soon as their rider is remounted.

Balloon: Balloon is one of the most popular speed races and can be completed in less than a minute by a good team of four. The first rider starts from the A line with a 4-foot dowel, topped by a nail. At the B line, there is a board with six inflated balloons attached. The rider rides past the balloon board, popping a balloon as he or she goes by. The rider then hands off the stick to the next rider, waiting behind the C line. The race is won by the fasted team to have each rider pop a balloon. Ponies must learn not to shy away from the wiggly balloon and not to startle at the loud pop of the balloon.

Agility Aces: Agility Aces is a popular vaulting race in which six upside down, small buckets are set in a row at the B line, parallel to the field of play. The first rider begins from line A, rides toward the line of buckets, vaults off, runs across the buckets, then vaults back on and crosses the C line, where the second rider is waiting. The second rider repeats these actions, crossing the A line. Then the third and fourth riders go in sequence. Buckets upset by the rider or the pony must be reset, and the whole row crossed again.

For four mounted games you can try at home, click here >>

For more information, visit the MGAA website at www.mountedgames.org.