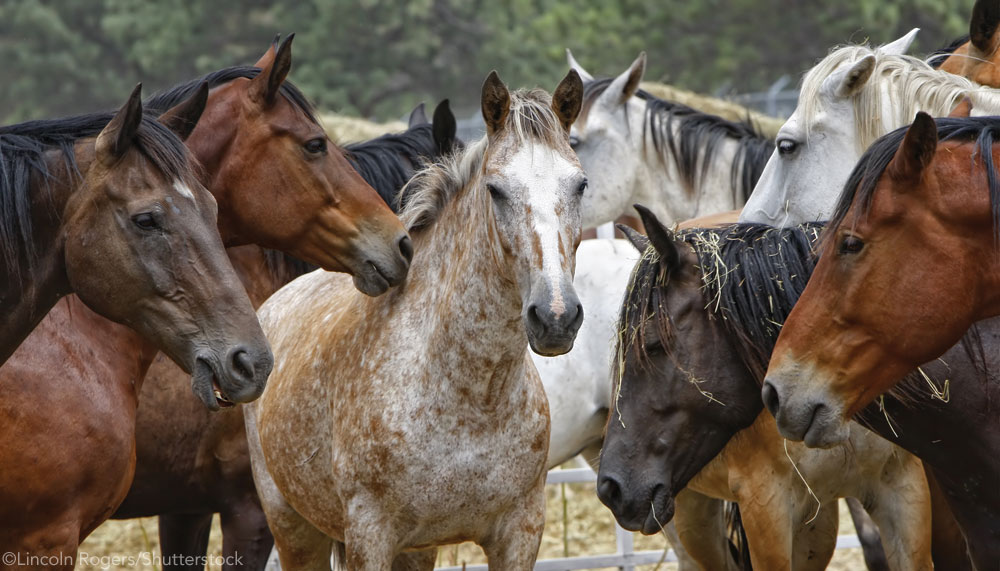 Horses and ponies can’t talk to you, but you can still understand what they are feeling just by paying close attention to their behavior.

If you study the way your horse behaves when he’s around you in the barn, and watch him when he’s out in the field with his pals, you’ll soon start to notice the messages that he sends out with his body language. Horses use different parts of their bodies to let you know how they are feeling, including their heads, ears, tails and legs.

If you ride a horse regularly, spend some time watching him out in the field. Take a picnic lunch out to the barn, and sit on the other side of the fence and just watch your horse and his pals for an hour or two. Note how they interact with each other. Horses that are friends stick close to each other. They graze side by side. If there are lots of flies, they might stand head to tail and swish flies off each other’s faces. If they feel itchy, they might mutually groom each other by nibbling on each other’s withers.

It’s nice when all of the horses in a field get along. One horse is usually the top honcho, and the others must obey him (or her!) The top banana gets fed first, and will sometimes chase his fieldmates away from hay or feed.

Unfortunately, there is usually a horse at the bottom of the ladder. He gets fed last, and gets bossed about sometimes. If a horse has been in a pasture for a while, he usually figures out where his place is in the group, and everyone gets along fine.

While you’re watching the  horses, you’ll probably see them interact with each other. They might just stand around and munch on grass, but they might also display some aggressive behavior to each other. Most of the time if a horse is annoyed with another horse, he will simply warn him to stay away. If the other horse doesn’t listen, the angry horse may kick out or charge at him. Here are some warning signals horses will give to other horses and to humans before they act aggressively. Have you spotted them at your barn?

If a horse feels threatened or grumpy, the first thing he’ll probably do is swing his body around so his tail is facing you or another horse. His ears will be back on his head, and his tail will be clamped flat.

If a horse does this to you or another horse, watch out—he may kick out. Sometimes a horse will do this when you approach him in a field or when you try to get him out of a stable. It’s best to stand clear and talk to him until he turns around and approaches you.

After a horse swings his body around, if he’s still feeling threatened, he may lift up one of his feet and threaten to kick. If a horse does this when you are nearby, give him plenty of room. If you try to get close, it’s likely that he’ll try to kick you. If he’s lifting the foot because of another horse and not you, get out of the way. If he kicks out, you might get hurt.

Sometimes a horse will pick up his foot, usually the hind one, when you are grooming or clipping him. A ticklish horse will do this to let you know that you’re irritating him. He probably won’t kick you, but it’s best to be gentler or stop what you are doing.

If the horse’s warnings are ignored, it’s likely that he will lift one or both hind legs off the ground and kick out at you or the other horse. A nasty kick could really hurt or even kill you, so it’s important to recognize a horse’s warning signs and move out of the way.

Another aggressive behavior that a horse may display is charging—when a horse runs at you or another horse and acts like he may bite you or the other horse. This doesn’t happen very often because horses are naturally timid. But, some horses were allowed to get away with bad behavior when they were young. They think that they can scare you by charging—and it works!

Here are some warnings that let you know that a horse is planning to charge.

A horse that’s going to charge will stand up straight and look startled. His ears will be flat back on his head and his head will thrust forward towards you. Before the horse charges, he’ll lift his tail in the air and swish it from side to side angrily. He may lift his foreleg and paw the ground with it.

Get out of the way!

When a horse charges he stretches his neck forward and heads for his enemy. His mouth will be open—ready to bite you or another horse. A young person should not be sent out in the field with a horse that charges. If you’re frightened that a horse will charge at you, ask a horsey adult to go out in the field instead of you.