Home » Riding and Training » Disciplines » Horse Racing » And They’re Off!

At the beginning of October 2013, I received a letter in the mail from the American Quarter Horse Youth Association (AQHYA). I didn’t think much of it at first, figuring it was just a notice to renew my membership … until I opened it and read, “Congratulations! You have been selected to attend the AQHYA National Racing Experience (NRE).” I was absolutely ecstatic!
Horse racing has been a passion of mine from a young age, and attending the NRE was an opportunity of a lifetime to learn more about the sport.

The NRE is a chance for teens to learn about American Quarter Horse racing and to compete for scholarships. 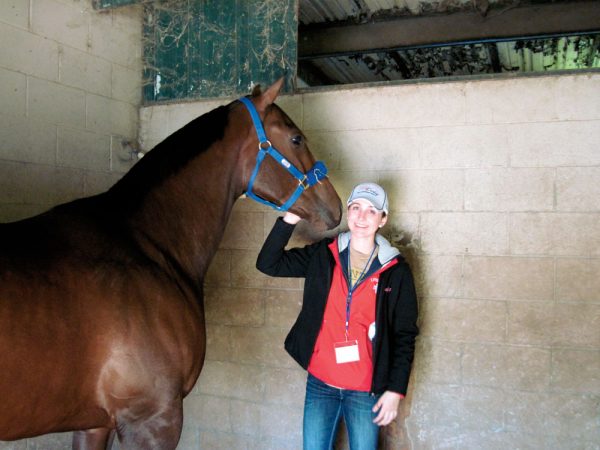 Before leaving for the NRE, I had to complete a workbook about American Quarter Horse racing. This was one of several scored components that would determine which participants would receive scholarships.

I left my home in Minnesota on Nov. 6 and flew to sunny California. I was greeted at John Wayne International Airport in Orange County by a diverse group of 10 girls from nine different states.

The next morning, our crew headed to Los Alamitos Race Course to begin the competition. We were placed in pairs with trainers who would teach us about racing for the next three days.

My teammate, Jacy Nelson, and I were paired with John Stinebaugh. John wasn’t scheduled to arrive at the racetrack until later that day, so we spent the morning learning the layout of the barn, becoming acquainted with the horses, and chatting with barn staff.

From the track, we traveled to Vessels Stallion Farm—a Quarter Horse and Thoroughbred breeding facility located in Bonsall, Calif. We learned the history of Vessels and its breeding program, and we visited the grave of First Down Dash—a champion Quarter Horse known for his success as a racehorse and breeding stallion.
We ended the day in Oceanside, Calif., relaxing on the beach and taking in the gorgeous sunset.

Friday morning dawned bright and early. We arrived at the track at 6:10 a.m. to watch a demonstration on how to saddle a racehorse. Afterward I met our trainer, John, and spent the morning learning about his training methods. I recorded this information in my trainer workbook—another part of the scholarship judging process. 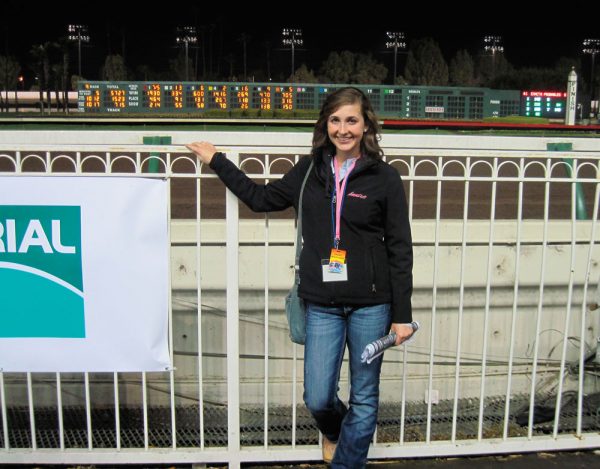 In the afternoon, our group watched two videos: one about the history of American Quarter Horses, and the other about racetrack professionals, including outriders, official starters and horse identifiers.

That evening we returned to Los Alamitos to enjoy a night of American Quarter Horse racing. We toured the jockeys’ quarters and then met the stewards in an office at the top of the grandstands, where we had a beautiful view of the track.

We watched a nail-biter of a race with a photo finish, which means the horses finish so close that it is difficult to determine the winner!

The following morning was filled with excitement because two big races were taking place that night. John was running two horses, All About Larry and Frankie B, in a race called the Red Cell Distance Challenge Championship.

The morning flew by as we learned about racing from John, the grooms in our barn, and a pony rider (the person who leads the racehorses to the starting gate).

John taught us about medication use and proper nutrition for racehorses. Although some people still attempt to cheat by using illegal substances, Los Alamitos does a great deal to keep racing clean and drug-free.

After finishing up at the barn, we were whisked away to Hollywood Park for an afternoon of Thoroughbred racing. I immediately fell in love with this track; it was beautiful on the outside and inside. The infield and the paddock area were especially gorgeous, with flowers planted everywhere. 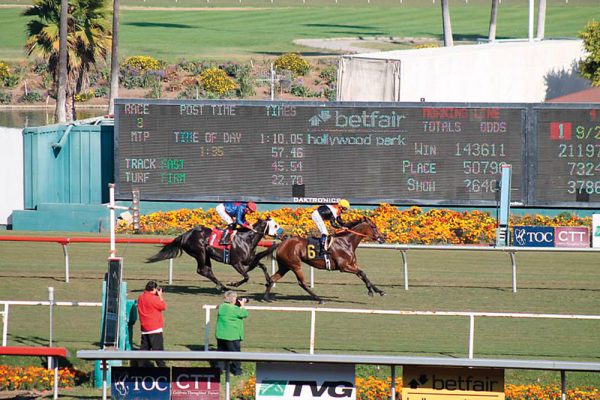 Wendy Davis, one of our chaperones at the NRE, knew a friend with a horse running in a claiming race that day. Her friend allowed us to accompany her to the paddock to watch her horse Chico Suerte as he was saddled for the race. As we walked through the grandstands, I spotted famous jockeys like Mike Smith, Joe Talamo and Kayla Stra.

We cheered Chico on to a fifth-place finish. It was bittersweet being at Hollywood Park and knowing that in a few months it would be closed. I felt privileged to visit such a beautiful and historic track before it was gone forever.

Back at the hotel, the NRE attendees took a final exam, which covered everything we had learned during the National Racing Experience. After the test, we returned to our rooms to prepare for a fun-filled night of Challenge Championship races.

After arriving at Los Alamitos that night, we headed to the winner’s circle to find out who had won the NRE scholarships.

The scores from our workbook, trainer packet and exam were combined into a total score to determine the winners. I could hardly stand still; I was so excited and nervous. The loudspeaker crackled to life, and my name was called as the first-place scholarship recipient!

After taking pictures with AQHA President Johne Dobbs, I was interviewed by the TVG racing network. It was a thrilling experience; it felt surreal.

After the fifth race that night, Jacy and I headed to the paddock to meet up with John and watch him saddle Frankie and Larry for their race. Both horses were calm and appeared to be in peak condition. Jacy and I found a good spot on the rail to watch the race.

Sadly, both horses had rough trips and finished toward the back of the pack. Jacy and I returned to the barn one final time after the race to chat with John. He told us that if you’re going to work in horse racing, you have to remember that you’ll lose more often than you win. I respected his positive outlook after such a tough race.

The next day our group dispersed as each of us returned home. Thanks to the NRE experience, I met lots of new friends, networked with individuals in the racing industry, and witnessed some incredible horse racing. It was an experience I wouldn’t trade for anything.