Great Britain is home to a variety of pony breeds, and some of the most popular are the Welsh, Shetland and Fell Ponies. They’re cute and short, but their personalities are much bigger.

This adorable breed is from the hills and valleys of Wales, which borders the west coast of Great Britain.

Because the winters in Wales were very cold and there wasn’t much to eat, survival wasn’t a piece of cake. Over time, a sound, intelligent breed developed. Because Welsh Ponies had to travel to find food, they developed great endurance too. They came to North America as early as the 1880s.

There are four different sections of Welsh Ponies, but all of them are known for their friendly personalities, even temperaments and natural jumping abilities.

The Section B Welsh Pony was created because the equestrian world wanted a larger riding pony. Section B Ponies have the same physical and personality traits as Section A Ponies, but they can be up to 14.2 hands.

Section B Ponies are suitable as second ponies and for teenager riders who have outgrown Section A Ponies.

Section C Ponies are very strong and hardy. Andalusian and Cob breeds were mixed with the Welsh Mountain Pony to create this section. They can be up to 13.2 hands and have a heavier build than Section A and B Ponies. These ponies can also have some feathering on their hocks.

They are very popular in driving classes and also make great second ponies.

Welsh Cobs in Wales had various jobs, including plowing fields, carrying farmers to markets and even driving families to places in town. Doctors and businessmen relied on them because they were considered one of the fastest forms of transportation before the invention of cars.

Section D Ponies are 13.2 hands and higher. Because these ponies are surefooted and responsive, they make great driving ponies. They can also be ridden by adults.

Visit www.wpcs.uk.com or www.welshpony.org to learn even more about Welsh Ponies.

These furry ponies originated from the Shetland Isles off the coast of Scotland. They’re known as “Scotland’s Little Giants.”

Shetland Ponies worked in coal mines in Great Britain in the 18th century. Their short height allowed them to fit through the tiny tunnels in the coal mines, and some of the ponies were even stabled underground in the mines. Because of the amount of time spent in harsh weather conditions with very little feed, the Shetland Pony became a very strong and hardy breed.

Many mine owners were interested in preserving the Shetland breed, so they formed a stud book. The first Shetland Pony Stud Book Society of the United Kingdom was published in 1891 and included 457 ponies.

Ponies could be no taller than 42 inches (10.2 hh) and all colors other than spotted were allowed.

Shetland Ponies are known for their kind dispositions. They are popular for very young riders because of their size and they are shown in harness driving classes too.

Shetland Ponies are sometimes called rebellious because many owners spoil them because they are so cute, but with the right training, they make fantastic riding partners. 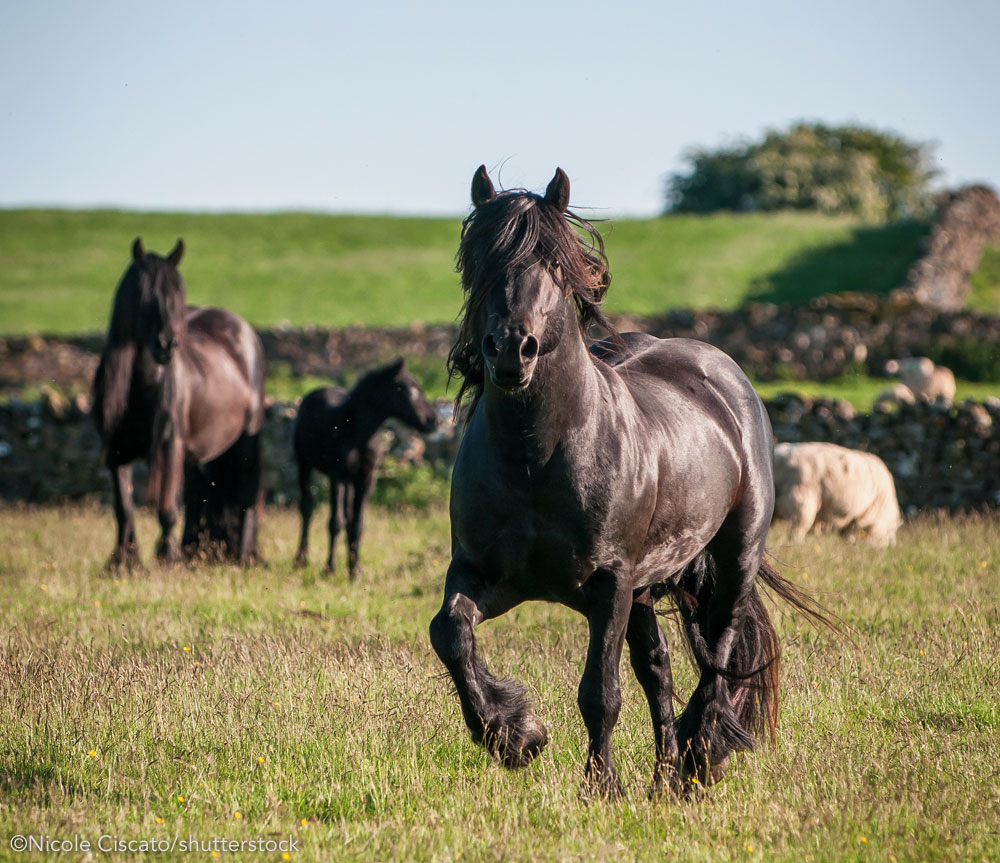 Almost every horse lover has seen a photo of a majestic Fresian, but not as many people know about the beautiful ponies that look very similar to them.

The Fell Pony has been traced back to an ancient Wild European Pony that was around during the ice age. The exact origins are still being researched with fossils today.

During the thirteenth century in England, Fell Ponies were often used to transport goods. One Fell Pony with a rider would guide groups of ponies without riders that were carrying heavy loads. Because they were able to handle the heavy loads for such long distances, Fell Ponies became famous as pack ponies.

During the eighteenth century they transported lead, coal and iron ore too. They could carry more than 200 pounds at a time!