Q: I’ve always been told that horses sleep standing up, but I see my horse lying down in the pasture during the daytime pretty often. Does that mean something is wrong with him?

A: It’s true that horses can sleep standing up. They have a mechanism called the stay apparatus that uses the tendons and ligaments in their legs to “lock” their joints. That allows them to doze off without having to use energy to hold themselves up. However, they don’t get the deep, restorative sleep they need with those standing naps. 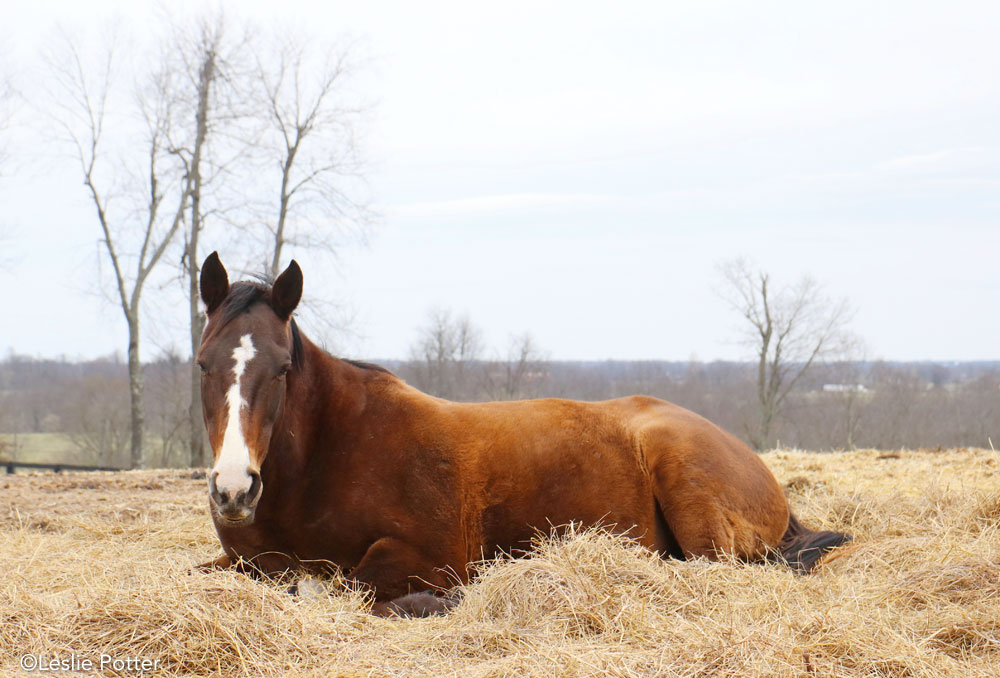 Just like people, horses go through a sleep cycle throughout the night. The lighter phases of sleep can be achieved standing up, but in order to get the deep REM sleep, all of the muscles must be relaxed, and that means lying down.

Thousands of years ago, your horse’s ancestors had to live with the ever-present threat of attacks from predators. Lying down would have made them more vulnerable, so the ability to get most of their sleep standing up is an adaptation that allowed them to flee quickly.

Of course, your horse probably doesn’t have to worry about predators in his pasture, but that instinct still lives on in modern horses, and so they won’t lie down to sleep if they don’t feel quite safe in their environment. The fact that your horse regularly takes afternoon naps in the field suggests that he’s pretty comfortable in his home and with his herd of turnout buddies. That’s a good thing!

The Right Amount of ZZZs

Most healthy adult horses only lie down for three hours a day at most, and that’s spread out over several sleep cycles. Horses don’t usually lie down for more than around 20 minutes at a time. Because of their large size, lying down for a few hours can cause problems with blood circulation, so you may want to check on a horse who has been lying flat out for more than 30 minutes.

A horse who doesn’t feel secure in his environment might need some changes to get real sleep. That could mean some stall time for a pastured horse or turnout for a horse who lives in a busy, noisy barn. It might mean altering herd arrangements so the horse is with others he feels safe around. Older horses with arthritis might need a bit more space or extra bedding to be able to lie down and get back up again safely.