Do you have a horse that heads for the hills the second he sees a dewormer syringe in your hand? Deworming is a simple procedure that should only take about a minute to complete, but some horses make it very difficult. It’s not clear why some horses hate deworming and others don’t mind it, but if you’re one of the unlucky owners with a horse that has a phobia, we’ve got some tips that might help you keep him worm-free. 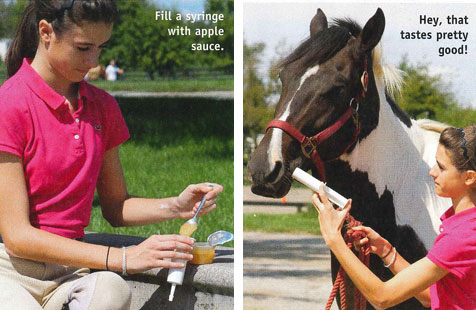 You should be able to buy dewormer in pelleted form at the feed store. For example, safe-Guard Equi-bits are made from alfalfa and look just like tiny green hay pellets. Read the instructions on the bag to make sure you give your horse the correct amount for his weight. Mix the pellets into one of his daily feeds and he’ll gobble them down without knowing he’s eating dewormer.

Grab a few of your horse’s favorite treats and stick a few in the corner of his mouth. As he munches on them, sneak the syringe into his mouth while he’s distracted.

When you’re looking at paste or gel dewormers at the feed stores, look for one that’s apple flavored. If the dewormer doesn’t taste too bad, your horse may not be so silly about being dewormed.

Grab two apples and carefully cut the core out of one of them. Squeeze the correct amount of dewormer into the apple’s center and then cover the top with part of the core. Your horse should eat the apple without noticing the dewormer until it’s on its way down his throat. Let him have the other apple afterward as a treat. 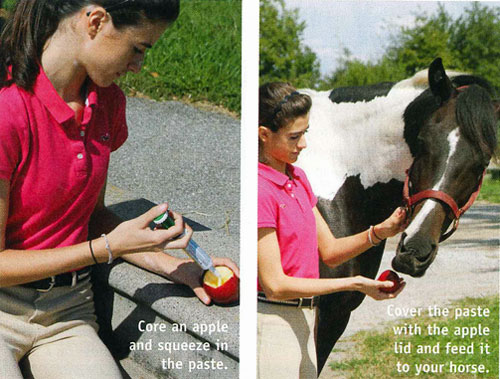 You could try a product called Easy Wormer made by Miracle Corp. The Easy Wormer is made of a nylon headstall and plastic bit-like applicator. Slip the headstall over your horse’s ears and place the “bit” in his mouth. Then squirt the dewormer into an opening on the side of the applicator. You can order Easy Wormer from most equine retailers.

In the past, it was thought that you had to deworm your horse on a regular basis, for example every six weeks, and that you should rotate the different types of dewormers to prevent the worms from becoming resistant to the dewormers. Recently, research has shown that it’s a better idea to do a fecal egg count on your horse to find out exactly what kind of worms your horse has so you can choose a dewormer that targets those specific worms. This should result in you being able to deworm your horse less—a very good thing if your horse runs a mile at the dreaded syringe.

Ask your vet if his or her clinic does fecal tests. If it does, scoop up some fresh manure from your horse and pop it into a plastic bag. It’s important that the manure gets to the lab within a few hours, so give it to your vet right away or take it to the clinic’s lab to be tested as soon as you can.

A lab technician will look at the manure sample under a microscope and note how many eggs are in the sample and what kind of worms laid them. Then you can chat with your veterinarian about a deworming program that is made specifically for your horse. Your vet will probably suggest a specific deworming product for your horse and tell you how many times you need to use it.

After you deworm your horse, it’s a good idea to re-test his manure in a week or so to see if the worm count has gone down. Fecal tests aren’t expensive; they’ll only set you back about $10.